The Village Library and Company Store

The library was said to have been promised to the villagers of Victoria Harbour by Mr. John Waldie – the owner of the Victoria Harbor Lumber Company. As the story goes, Mr. Waldie promised to build a library for the community if they in turn voted for prohibition of liquor in the village. The men of the mills knew their jobs depended on the way they voted, so the vote passed.

Afterwards, as promised, construction began on the library in 1914 and completed in 1916. It served the community as a library until 1927 when the last lumber mill closed and the Company left the village. The building was deeded to the Corporation of the Village of Victoria Harbour in 1933.

Across the street is the former Company store. The building was built in 1902 by the Company to supply workers in the mills and their families with food and supplies, and came to be known as the “Company Store”. By operating the store themselves, the Company was able to give credit to their workers during the off season, supplying the community with goods when the mills were closed for the winter. 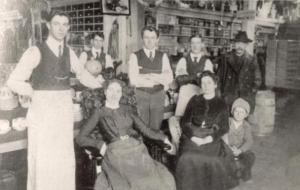 The store had a change trolley that ran from the front cash to the office. Payment and the bill were placed in a basket that travelled to the office and eventually returned with the customers change. Mill workers were paid in part by “script vouchers” that could only be used at the Company store. 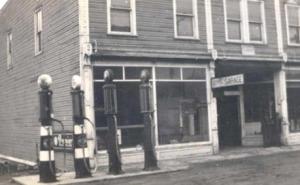 It currently operates as an antique store and café under the former Victoria Mercantile name. The exterior of the building has been reclad in vinyl siding, maintaining its original “canary yellow” colour scheme. Otherwise it remains largely unchanged.

Arches and scrollwork adorn the upper windows and the façade. The storefront maintains its recessed doors centered between two large display windows. Despite renovations the original floors are still in place.

In 1982 the building was designated as a heritage building under the Ontario Heritage Act and is protected against demolition and changes that would destroy the heritage value of this local landmark.